Second to the Right and Straight on Till Morning 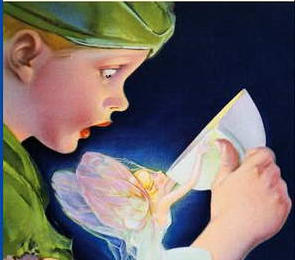 "All children, except one, grow up."

Supper was over and he kissed me on the cheek.  Then he stopped to examine my face closely.  He went over to the sink, got the dishrag, and carefully wiped off the stickiness.  Then he gave me a new kiss, fresh and clean.

And I wish I could somehow preserve the sweetness of the moment.

Perhaps it is the universal paradox of parenting that the same milestones we celebrate are also the markers of  time that we mourn.  It is, after all, our job as responsible adults to teach our children independence.  And yet, as they graduate in increments from our effective schooling, we perversely go off to lament in private.

It is a concept difficult to understand before childbirth.

For example, I never could fathom why mothers cried at weddings.  Why would you want to weep at a party?!!!

And so Nevin and I got married in North Dakota, flew to Atlanta a few hours later, tanned on the beaches of Florida, and never thought of calling home until we had finished cavorting on the sands of the Bahamas.  And then we wondered why our parents had been worried.

It wasn't until we brought Randall home from the hospital and I was rocking him, entranced with his newborn sweetness that I suddenly thought, "I know why mothers cry at weddings."

And so I called my mother to tell her, and she said dryly, "My, you've grown up in two weeks!"

But now I know and cannot escape this terrible grown-up truth that the ticking crocodile chases, not just Captain Hook, but us all!  And we who cannot stay in Neverland are doomed to catch the precious moments only in pictures and words woefully inadequate even in their sophistication.

Sometimes though, in the last six years, I look at Wade and think that somehow the extra chromosome has tricked the ticking monster into slowing his pace.  The clock chimes more slowly and the sweet hours stretch longer, and I can see that the differences between him and our other boys allow us to preserve the childhood moments a little longer, like twinkling fireflies captured in a jar.

It isn't that he's an angel; it isn't that he's perfect.  He's as capable as any other child of yelling at his brothers, keeping the toys for himself, and going limp as a noodle to avoid being carried off anywhere he doesn't wish to go.

In fact, at times, he's quite as selfish as Peter Pan.

But then he also carries with him the artful innocence of childhood.  And he keeps the delight of Every Day without the urbanity of boredom.

And, as I go about my parental duties of training my children to leave me,  I look at Wade and then up to God and thank Him, once again, for this:  the Gift of our Imperfection.

This was a terrific post to end 31 for 21. I love it and its definitely going in my favorite post folder. I have enjoyed following your 31 posts and I look forward more adventures of Wade ;-)