The Music Lives On 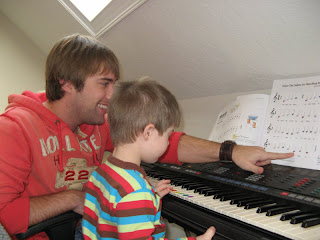 Today we said good-bye to a friend.

He came for three years with songs and laughter and dancing, and Wade followed him like the Pied Piper of music therapy.

His teaching was a mixture of rhythm and glissandi, listening and counting, beach balls and swirling scarves,  piano and castanets.

And for everything there was a song.

But now he's gone and we don't have a song for that.

And Wade doesn't understand the meaning of no David.

And I don't know what to say.

So we sit together and sing the "Good-bye Song" as we did so many times at the end of a session.

But somehow it seems all sad and wrong.

And then suddenly I know why.

It's the wrong song.  David would have known that.  Because his music isn't ending; it's only beginning.  Today he is singing new songs more beautiful and golden than any he sang on earth.

And so we sing again, the right song this time, to David who lives today as he never did before. 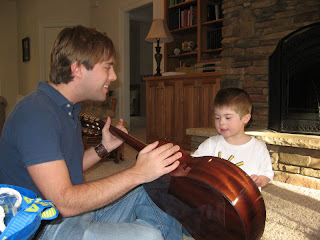 I'm so sorry for your loss. David looks like a man who brought much joy...love the radiant smile on his face!

And blessings as you try to help Wade understand.