This Is Your Brain on Down Syndrome 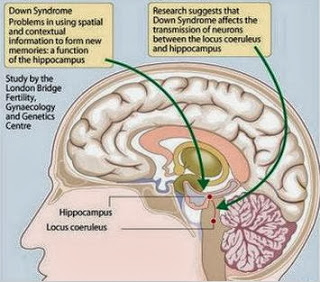 Even though Down syndrome is a common disability, relatively little is known about exactly how that extra chromosome works in affecting development and cognition.

This spring, neuroscientist Anita Bhattaacharyya published new research that gives us a limited peek into the brains of people like Wade.  From her medical report, I understand two things:
Other studies reflect improper development and/or function of the hippocampal and pre-frontal systems of the brain.  These areas deal with memory, spatial navigation, and complex cognitive behavior.

And those are all vastly detailed studies with many things I don't understand at all.

But I do understand that I live with a child whose brain is different.  I cannot observe him day after day without realizing that his brain works differently from the general population.

He is very apt to take memorized sentences from a book or movie and repeat them at appropriate (or inappropriate) times.  But he struggles to express simple ideas on his own.

For example, one day he said, "I love you!  Bye!" and from the way he said it I knew it was a repeat from something he had heard.

So I asked him who said that and he said immediately, "Bob!"

He screwed up his face and thought hard.  Finally he said, "Larry the Cucumber."

And he was very happy that I finally realized he was talking about Bob from Veggie Tales.

He knows that the videos are called Veggie Tales, but his brain just didn't connect everything at the right time for him to tell me that he was talking about Bob from Veggie Tales.

His brain is not, however, consistently disconnected.  Sometimes he pulls it all together.  I was leaving school at the end of recess one day last week.  He ran over to hug me good-bye and said clearly, "I played Duck, Duck, Goose.  I'm going to work fast."

And it always amazes me the things he remembers to bless in his prayers.  "Dear God, bless help Daddy. Van wrecked.  Bless computer, Fancy Pants, Winnie the Pooh, and phone."

He also has the ability to see things we don't (until he uncannily points them out):  Bethlehem in the pan of bread sticks, winking eyes in a pool of ketchup, and Grandpa in his piece of toast.

In school, adding makes sense and is relatively easy.  But reversing the process for subtraction is more difficult.  Naming the number after a given number is easy, numbers before are harder because he has to think through a process backward.

One day he was playing outside while I weeded the flower beds while wearing garden gloves.  As I worked, I showed him the snowball bush that was blooming and told him about the plant parts, stem, leaves, and flowers.  He listened attentively (I thought).

The next day he saw a pair of heavy winter gloves that I had used while cleaning out and organizing the freezer.  I happened to see him suddenly grab those gloves, put them on, and head outside as if he had a mission in mind.  I followed him and this is what I saw. 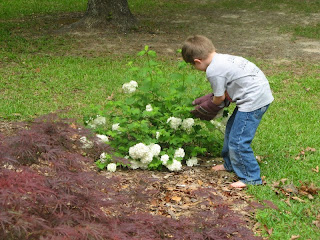 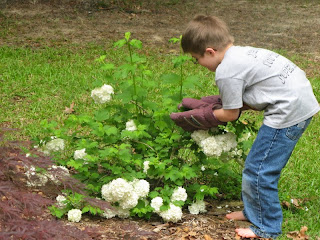 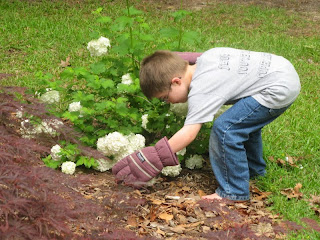 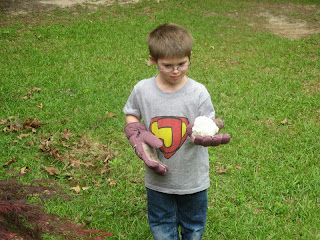 I don't think he heard a word of my lesson on plant parts.  But he did notice that I was wearing gloves while I showed him the flower!

Even though oddities such as this happen regularly, my brain still feels stunned with amazement when they occur.

I look at his fuzzy brown head and wonder what really is going on in there.

And I think the next tourist attraction that should be developed is not the opportunity to take trips to Mars, but, instead, the chance to take trips through other people's brains.

Welcome to our planet.

(When brain tours become available, these will be my top four tours:  Trisomy 21, artists, mathematicians, and musicians.)

I love your affirmation of your son's gifts.