You've heard the statement:  When all else fails, read the directions.

When teaching Wade, however, I've learned that when all else fails, I need to write the directions.

We can tell him something over and over, but sometimes it just doesn't seem to sink in unless he sees it written out.

For instance, he's very good about getting up by himself in the morning (early!), dressing himself, and putting his p.j.'s away.  But for a long time he would forget to take himself to the bathroom until he was doing the Barely Holding It In Dance.  Reminders didn't seem to do any good even though he could dutifully repeat them back to me.

But then I had an idea.  Every evening when I laid out his clothes, I put a note on top that said: "First go potty.  Then get dressed." 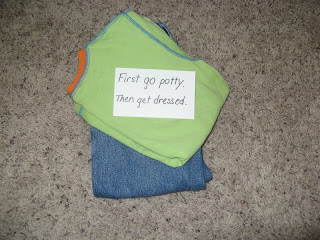 Voila!  It has worked like a charm!
Now when I lay out his clothes, he is religious about putting the sign on top. 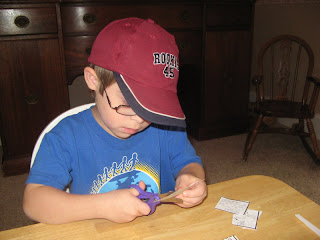 Cutting with scissors has also been a difficult skill to perfect.  The last several months though we've been listening to classical music while he cuts and he is doing much better with attending to task and cutting a variety of shapes.   Whether the music is calming to him or whether it just provides a pleasant distraction to a tedious task, I don't know.  But it always has to be Beethoven.

Wade:  Beethoven!
Me: Oh, come on.  How about some Chopin or Mozart today?
Wade:  No, Beethoven!

So Beethoven it is. 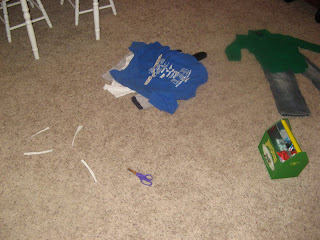 I think we're entering a new era in the Cutting with Scissors department (not to be confused with Running with Scissors).  Two times recently he's been quietly busy all by himself in the morning Cutting Things Out. 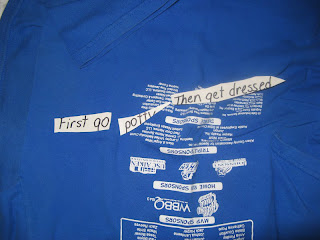 This time it was his Go Potty First sign all cut out and arranged nicely on top of a pile of four shirts.
We hope this fervor won't digress into Cutting Up Valuable Documents Left Unattended. 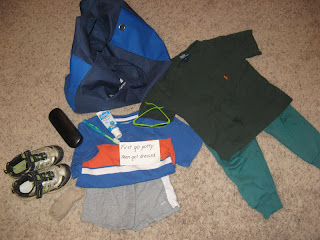 And lately, he's been packing a bag every morning in hopes that he will get to stay overnight at Grandma's house.  He remembered p.j.'s, glasses, shoes, socks, shirt, pants, toothbrush and toothpaste, and the First Go Potty sign!  But he forgot to put in any underwear. 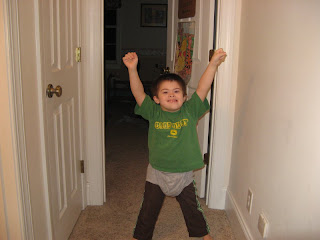 That must be why Chris found him that evening dancing outside his bedroom door wearing his pajamas and three pair of his brother's underwear.

And that's all I've got to say about that.
Posted by kkstrite at 6:36 PM

Does Wade recognize the music of the different composers or does he see the picture on the CD case?

Uncle Ken, he just seems to like that one cd of Beethoven. I'm not sure if it's the music or the name he likes!

How old is your son and wear do you get your teaching tools for him. I have a daughter that will be 5 next month and I have downloaded some things for her to do but I like some of the things you use.

I have a large variety of sources I pull from. If you look at the labels at the side under Down Syndrome Education or Down Syndrome Resources, I have some of my sources linked in the blog posts that will pop up under those labels. Are there some specific things you have in mind?

Thanks for responding to me so fast, I like your matching words sheet,your play dough alphabet presses and your math chart. but I will check out your resource tabs also. Reading your blog has giving me some good ideas that I'm going to try and also tell my friends with children with DS about.

Thanks for sharing this. I will have to look into the label idea since Little Miss D does a lot of sight words now.