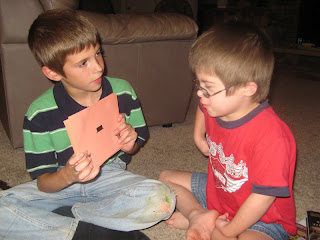 I like the discipline that piano lessons teach Wade.  Many processes are going on simultaneously when he is reading notes and translating that information into isolating the proper fingers on the right keys, while, at the same time, trying to count the rhythm.

Here are two videos taken about a week apart.  It's encouraging to see progress in his ability to focus on a difficult task with only minimal prompting.

He loves music and the piano, but sometimes he tries to shut down if a new concept seems to be too hard.  It takes some perseverance to help him learn and then to sit beside him daily making him focus until the end of the song.  But it really doesn't take long each day to do and learning new skills gives him the confidence that will be the springboard to perfecting further skills, both musically and otherwise.  There is, after all, something to be said for the (significantly modified) Battle Hymn of the Tiger Mother.

And this week for the first time, he chose to sit down at the piano during his free time, and he played all four of his newest songs completely by himself without taking a break.

In the second one he is trying to sing the words while keeping the rhythm.  It isn't perfect, but it is one step in that direction!