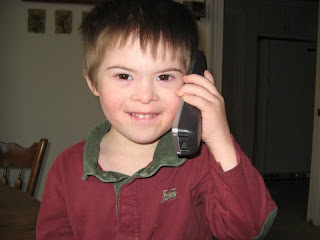 Language has been the slowest part of Wade's development.  His receptive language is considerably more advanced than his expressive language, but both are lagging.

It has been interesting to observe, however, that he really doesn't learn so very differently from other children, but he just smells the roses longer at each spot before he moves on.  This lingering in the rose garden has enabled me to examine with greater clarity the processes that take place in developing ordinary skills and to become aware of how to break down those processes into small steps that are not so overwhelming.

And the more I learn, the more I am stunned at the way the Creator made us.  Truly, the half has not been told, because it hasn't even been discovered yet.

So, as Wade's vocabulary is expanding, so is mine, which is proving to be good cerebral exercise for each of us.

However, on my way to town one evening with all three boys, I was annoyingly aware that one of them was mass-producing excessive vocabulary, blah, blah, blah, all the time with never a break, and it was getting to be TOO MUCH.  So as any good mother would, I opened my mouth to say, "Would you please be quiet?"

Then it occurred to me.  That was Wade talking non-stop!  We had waited a long time for this moment.

And I shut my mouth and smiled.

It was such a delight then to go home and tell Nevin, "Guess what!  I almost had to tell Wade to stop talking so much tonight!  Isn't that great?"

Every day now, I am treasuring hearing him express his thoughts with that refreshing perspective little people have.

So here are some Wednesday words of gold.

"Mom, coughies!"  (he had the hiccups but couldn't think of the right word)

And when he got a picture in the mail just for him of his cousin Kay Wren: "That's cute!  I love it!"

He is currently tucked in bed sleeping with the picture.

And I think that's cute! I love it!

Karen, keep it up! Just because we don' comment doesn't mean we don't read every word! Sure do enjoy it. Keep it up! Ruth Ellen

Yay Wade! I can't wait to hear your non-stop talking!