Putting It All in Perspective 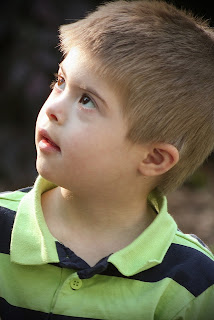 I agree and then look at Wade a little guiltily and think, "What if he weren't doing so well? What if he had more health issues?  What if I didn't have such a loving support system?  What if things were different? Would I still be able to cope?"

But then I think of all the fears of a previous life.  A time when I thought, "What if I have a baby with a disability?  What if I'm not equipped to live in this world?  What if the weights of these new responsibilities crush the joy from life?  What if I forever feel the cuts of fresh wounds as all of my baby's peers surpass him in every way?  What if we join the ranks of those beaten by circumstances, slogging drearily on and on and on and on?"

And I was afraid.

Ironically, though, the baby in my arms--the object of my fear--was not afraid.  He was not afraid of this inadequate mother, this imperfect environment, this disability world.  And as he has grown, he has continued to exhibit a strange and marvelous lack of fear.

He fears not the blackest dark, absolute strangers, deep water, great heights, or things that go bump in the night.

It is as alien to me as falling down a rabbit hole into Wonderland.

This innocence and lack of fear require me to be a bit more watchful of him than I might be otherwise.  Because of the world we inhabit, I must see the danger he doesn't.

But it is becoming a little less foreign as the years go by  to trust first and worry second.

And as I explore his world, I observe the delightful freedom that is his.   It it freeing to be happy with yourself and your limitations as well as with everyone else and their limitations.  It is refreshing to be able to love freely and generously without worrying about what others may read into your motives.  It is lovely to be able to greet each day, each stranger, each opportunity with such enthusiasm.

And in observing his innocent trust, I have realized how much inappropriate fear I have carried with me.

In the life that existed B.W. (Before Wade), I had a secret fear that God would call me to some obscure mission in a part of the world that I would hate.  And I would have to go, dragging my tracks shut in dogged submission to the Divine, getting up every morning and having to slay myself on the altar all over again.  Because wasn't that what God was about?  Saying "Go!" and making you hop to it, asking why it wasn't done already yesterday, and what were you waiting on?

Well, that was my niggling fear anyway.

And I have learned that if, for some reason, the events of Life would bring changes that would seem more difficult, God would be there ahead of us--leading us gently, not driving us with a whip--and that there would still be joy in the journey.

I knew all of that in my head before.

But now I know it in my heart.

And sometimes I wonder--those beautiful slanted eyes of love, the eyes that are alien to our family...

I wonder.....are they the eyes of his Father?

There is no fear in love, but perfect love casts out fear.  I John 4:18