All the Things He'll Never Do 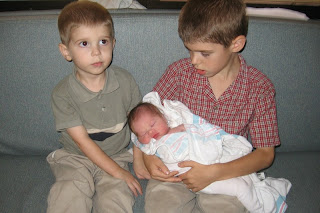 When Wade was born with Down syndrome, we immediately thought of the limitations we imagined would be part of the script of his life.  During that first week as we waited for test results to come back, I tried not to think the long thoughts I was thinking.  And when Wade failed his first, second and third hearing tests I looked at him sleeping soundly and wondered if this was only the beginning of many failures.

But the day the definitive test came back, in the midst of my tears,  I suddenly had another thought:  Wouldn't I rather have him be like this than to be evil?

And then my thoughts took a different road.

Think of all the things he'll never do!


He'll never be a threat to anyone.


He'll never hold someone hostage or commandeer a school shooting.


He'll likely never kill someone because he's driving under the influence of alcohol.


He won't embezzle millions from his employer.

Now, I humbly realize that I, like Adam and Eve, have lived my life under the delusion that a knowledge of good and evil is desirable.

And I look at Wade and realize that I, too, would really rather not know evil.  But I must, because only to him and to those like him has been given the wonderful Gift of Innocence.

And it is this beautiful Gift that connects me daily to that Better World where, someday once again, we will know only Good.