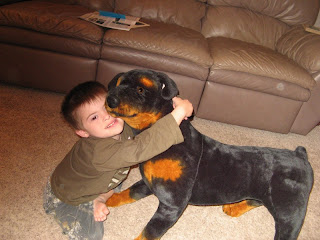 Once in a rare while in the last five years, while playing with Wade, I have been startled to think, "He looks as if he has Down syndrome."

And then all in the same split second, I remember, "Ah, yes...he does."

It is always with utmost astonishment that I realize I've had such an exchange with my brain. When Wade was born, I thought, never, ever would I be able to forget that extra chromosome. It would, I assumed, be a rain cloud that would hover nearby forever. My own personal weather system with a gloomy extended outlook.

So now, when I experience those flashes of forgetfulness, it makes me laugh with joy. Who knew it would be this way? Who knew life with Down syndrome would become so routine, so part of the ordinary as to be at times only noticed in the same way you would have noticed that fleeting expression of Randall's so much like his cousin Kari, or the way Christopher tells stories with sound effects in the same manner as Uncle Kent.

Some time ago, I read a fascinating true account of a group of people living on Martha's Vineyard who had been affected by a form of hereditary deafness. By the mid 1800's, some of the villages exhibited deafness in as many as one out of four people. Because of this widespread occurrence, the entire community learned Sign language. In some amazing interviews later done by an anthropologist, old acquaintances would talk lovingly of their memories about the former residents without ever mentioning the fact that they were deaf. It was only when asked by the interviewer if these people were not, indeed, deaf that they would stop to think and then say, "Now you come to mention it, yes, Ebenezer was deaf."

I found that account extraordinarily touching.  How lovely to read of a world where people were not identified by their limitations, but were first humans, neighbors, friends, fishermen....whatever anyone else was.  They just happened to have that little quirk of being deaf.  And by learning the language of the deaf, others could enter their world freely and with such understanding as to hardly know who was deaf and who wasn't.

And so, it is with gratitude that I go on learning....about myself.....and about others....and about the bond that connects us all.

And it is in this journey of transformation that I feel with the poet John Magee that "I have slipped the surly bonds of earth,...put out my hand, and touched the face of God."