Go Ahead and Laugh 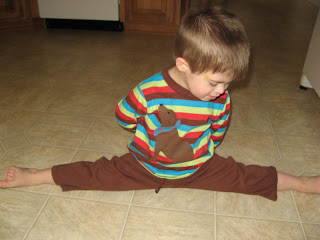 Don't tell me God doesn't have a sense of humor.

Just when you think you have child-rearing figured out, along comes the next Personality who bears no known resemblance to the previous one. And you're back to figuring it all out again.

Then the third one appears with Down syndrome and so in addition to child-rearing books, now you have Down syndrome books which you devour while trying to figure out what particular quirks are just typical quirks and which are part of the extra chromosome.

It all adds up to being a very great way to make you pray for wisdom every single day!

It also reminds me to laugh at myself and to be flexible, which are two of the greatest rules ever.

One of the characteristics of Down syndrome is hypotonia or low muscle tone which makes the muscles appear relaxed or floppy and causes increased mobility between the joints.

Wade's ability to flex in uncommon ways has always amazed us. He could sleep very comfortably while doing the splits. He learned to sit up by lying on his tummy, splitting his legs open in opposite directions behind him and moving them out and around 180 degrees forward. I would have declared that was not a possibility until I saw my own flesh and blood performing it effortlessly.

And his talent for achieving karate moves while fastened in a car seat is becoming legendary. With all three boys sitting in a row, in seat belts and facing forward, I would never have thought I would be saying, "No, no! Don't kick your brother in the face!" Wade truly does that with great agility.

But as I watch him carelessly using his foot for a telephone, I am reminded of the greater implications of flexibility in our family life.

Having a child with Down syndrome has opened our eyes to the many different ways other individuals can view the world. If we want to have the richness of traveling new roads and gathering new experiences , we have to be willing to entertain the possibility of looking at life in new ways. The old rules may not apply to a new situation. Will we able to flex with the new or will we stubbornly keep trying to force a swimming pool to be a skating rink?

In our house, we don't do baby talk. Why teach your children one language only to have to train it out of them later on? So we routinely used ordinary adult language with our other boys and expected them to understand it. Body parts all had proper names from the textbook; appropriate behavior was discussed and assigned; when you had to go to the bathroom, you went to the bathroom, no poop and pee-pee here, thank you very much!

And then came Wade.

Wade had great bathroom skills with only one problem. He had difficulty communicating his needs. Yes, he did make the sign for "toilet", but I often couldn't distinguish it from other similar signs.

So now in our house we go pee-pee very proudly.

And this morning, as Nevin and I were doing a LIVE television interview, Wade, sitting on Nevin's lap with his head right next to the cordless mic announced that he had to go "pee-pee".

And somewhere God is laughing.

Great post. I laughed at least twice. Charlotte has been kicked many times in the car, and we have had to referee many fights about Jonathan's leg laying across the back seat (in a way only Jonathan could) invading Charlotte's personal space.

My personal favorite is when we are in a church pew, and he is sitting up straight, and both feet (with Sunday shoes) are next to (or behind) his head. I can only imagine what it must look like to the good Reverend.

And I am laughing too! Karen, I have thoroughly been enjoying your informative posts about Down Syndrome and sweet, captivating and completely wonderful Wade.
-coleensr