He makes music an adventure. 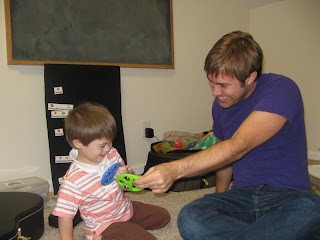 He makes Wade sound good on a guitar. 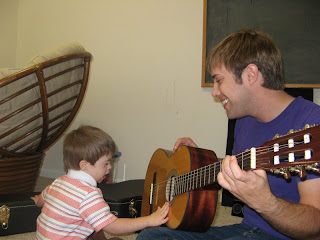 He knows all about Tiggers being wonderful things. 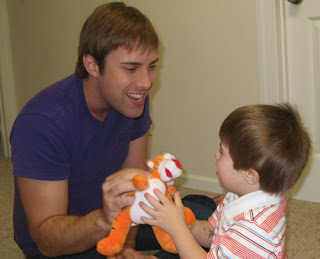 He makes us laugh. 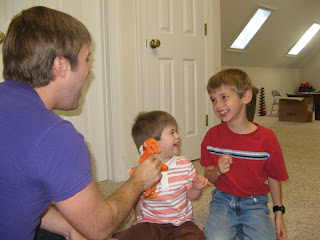 When has work ever been so much fun?

Like many other children with Down syndrome, Wade has always loved music. Because he loves music, it proves to be one of the best pathways for learning that we have found.

(It also has been a good way to make the vegetables go down--a healthy modern option that Mary Poppins didn't know about.)

When Wade was still quite little, I found the Sign, Sing, and Play Kit by Monta Z. Briant which included flashcards with pictures and words on the front and illustrations of how to make the signs on the back. It was a terrific prop for my brain to have those illustrations handy for those days when Wade could pick up the signing much faster than my mind could go.

Along with the flashcards, this kit included a songbook and CD with songs which used many of the words which were being taught. That was a wonderful way to teach sign language and it became Wade's favorite CD until we met Kindermusik and Earthshine Pediatric Therapy.

Wade has been getting music therapy now for about nine months and I am so pleased with the great strides in his language skills since then. David works with rhythm, sound discrimination, cognitive and listening skills, etc. Spoken language has a rhythm, and he and our speech therapist have both told us that soon after a child acquires rhythm, he often will have a speech explosion.

(Do you think Christopher acquired too much rhythm? Because so far his speech has never stopped exploding. I'm blaming it on all the time he spent in that baby swing.)

For more on the subject of music therapy and Down syndrome, here's a link from the National Down Syndrome Congress--Music Therapy Encourages Development.

And for other reading on music and the brain, do check out this utterly fascinating book by Oliver Sacks.

Musicophilia: Tales of Music and the Brain tells stories of some of Dr. Sacks' case studies, including the occurrence of a man who became passionate about music after being struck with lightning. I don't think that is the recommended way to become a concert pianist.