Can You Hear Me? 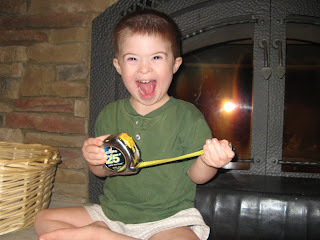 Does this look like a boy who has sinus congestion and fluid on his ears? I didn't think so either.

But fortunately, Wade is equipped with a vigilant speech therapist who picked up on the fact that he wasn't following familiar two-steps directions last week because he wasn't hearing properly.

We had an appointment with the ENT today who told us that Wade's second set of tubes are no longer functioning, resulting in fluid on his ears from his allergy-related head congestion of the past week and a half. So after we see how the antibiotic works in getting rid of the fluid, we'll have a follow-up appointment to discuss having the third set of tubes installed.

It can be very difficult for me to tell when Wade has fluid on his ears because of his unfailing patience and pleasant disposition. But we have been told that hearing through fluid is sort of like hearing underwater. I can't imagine how annoying that would be.

It seems that if he doesn't have functioning tubes, he has continual fluid on his ears. And continual fluid left untreated can cause conductive hearing loss as well as sometimes irreparably hindering speaking skills.

So get those ears checked routinely!

Wade has appointments at the ENT every three months, but most of the time hasn't even been able to go that long in between visits. This summer was good for him with the tubes still in fine shape and with all that pool time helping to keep his very tiny ear canals cleaned out. But allergy season and winter are not great things to face without functioning tubes.

Even though I am learning what to watch out for, I still can easily miss clues with a child who doesn't complain. I thought that certainly his tubes would still be in good shape since it's only been about seven months since surgery. But I was wrong.

Thank God for those wonderful people called therapists to whom our child is more than just a job!