To paraphrase Tigger, the dangerous thing about stereotypes is that stereotypes are dangerous things.  In other words, to paint all members of one group with the same paint brush is to deny them the right to be human.  This is equivalent to assigning them a number instead of a name.

But when we look at the name instead of the number, we know that, contrary to popular thought, children with Down syndrome are not happy all the time, Italians are not all mobsters, the French are not all romantics, African-Americans are not all basketball players, and Mennonites are not all good cooks or seamstresses. Stereotypes give a "sometimes truth" that can be just as untruthful as a lie.

So the stereotype says:  children with Down syndrome are affectionate angels.  And they are.  Except for when they aren't.

For example, that day at school when Wade locked me out of the van--with him and the keys inside and with me outside begging and threatening and writing notes and holding them up to the window in hopes that the written word would penetrate his sulky brain:    "Open the doors now!" and  "Do I need to call Daddy?"  And he snooted his face at me and then pretended I didn't exist.  No, I'm pretty sure he's not an angel.

The stereotype says:  potential is limited for those with an extra chromosome.  And it is.  Except in the ways that it isn't.

Wade entered first grade reading everything in sight.  And there is not the least bit of hyperbole in that statement.  But he needs a shadow at school to keep him on track.  And sometimes he needs a written statement to drive a point home. 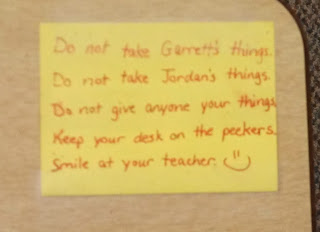 The stereotype says:  People with an extra chromosome are stubborn.  And they can be.  Except for when they aren't.

But my favorite story of all about stubbornness is below.  It's a story that could fit a stereotype.  But which one?  Is it Down syndrome or is it adolescence or is it just a comedy?  Do go read it.
"For the Pedestrians and Coffee Drinkers on Wellington Street:  An Apology, An Explanation" 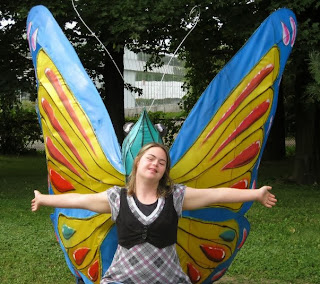 Every stereotype can be broken with a face, and every face has a story.