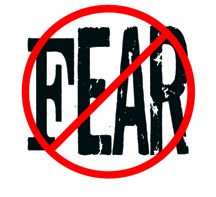 Probably we have all experienced fear in the past year.

Maybe you couldn't find your child in a busy store....and 5 minutes felt like an hour.

Maybe you received a medical diagnosis that made you afraid of the future--or of no future.

Maybe you felt a knot in your stomach (not too much, but just a little bit you know) at the logistics of setting up a new business in a poor economy.

Maybe you were afraid of what can't be explained.

Maybe you were afraid of the truth.

Maybe you wish an angel would appear to you and say, "Fear not!"

In the linking of what appeared to be separate instances,  I had an "aha" moment this week complete with two stunning visuals to help me remember to fear not without an angel.  Or maybe there was one.  Who knows?

Nevin had shown me the first video a few weeks ago, a matter of physics and pendulum waves and patterns of movement that cycle through moments of being in sync,  then apparently chaotic, and then back in sync again.  "Wow!"  I said, "Cool!"  and went on with my day's work.

On Thursday, our neighbor who creates metal sculptures, called us to come and see his latest creation he had just finished out of pieces from an old restored mill building in town.  He had centered the design around an old scale from the building and had incorporated working parts with chain pulleys and big wheels.  He had echoed the lollipop shape of the scale in several other metal lollipop pieces, some fixed on the back of the sculpture and some free-swinging on two of the large wheels at the top.

I was fascinated with how much those lollipops reminded me of the seats on a ferris wheel as the wheel spun.  But then at certain points they seemed to move at random, flinging themselves in every direction instead of moving smoothly.  "There is a mathematical term for that," said Mr. Finch, "and they are not chaotic although they appear to be."

Hmmm.  Something began to click.  Was it random that the same idea appeared before me twice within a few short weeks?

I don't think so.

Look at these two videos, the first a visual symphony of uncoupled pendulums and the second a computer-generated music box of movement called digital harmony.

Notice the moments in each one where the movement appears to be random, chaotic, without reason.

Then notice how it all comes back together into a beautiful dance of rhythm and order.

...about the Divine Master who created the laws of the universe

...about that same Supreme Being Who knew the rules well enough to break them and send a tiny baby--half human, half God--into a chaotic world

...about a baby who brought with Him the love that makes beautiful harmonic order out of brokenness

...about a baby whose life gave us the purpose to move through apparent randomness toward a predictable goal

...about a baby who taught us that what appears to be random, isn't.

And you might just carry these visuals in your heart to help you move through the moments of fear in a new year.

The choice is yours and mine. 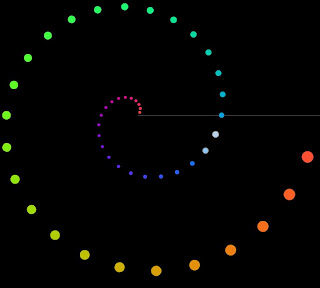 Click on the link below to start the animation.
Music Box

I love this! It's deep, but yet simple! Merry Christmas!