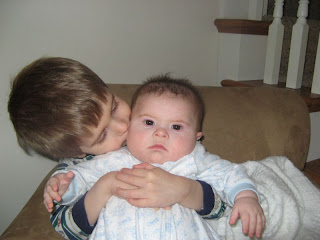 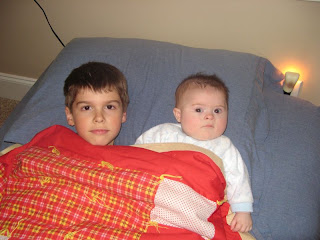 March is a busy month for Wade. We have to keep our little black book handy to stay on track with all his appointments.

Last week we took Wade to Dr. Flannery, doctor of genetics, for what we thought was our last meeting with him. Dr. Flannery had said that he wanted to see Wade once more after the sedated hearing test was completed. Of course, because this is the Medical College, there are always students in training who come in and look at Wade also. Wade kicked his little toes and smiled at all who peered at him. Everyone always laughs at how chubby he is and how his hair always seems to stand up no matter what we do with it. Before Dr. Flannery left the room, he patted Wade’s hair and said, “You need some hair gel!”

Dr. Flannery had initially seen us in order to get all of the gears meshing so Wade would receive all the therapy/medical attention he needed in timely fashion. Now, however, he told us there is really no reason for him to be seeing Wade any more, but he’d like to see him again in 3 months. We have no idea why. Who knows, maybe MCG is short on genetic abnormalities to study! It is very interesting for us to hear their observations about Wade’s progression. They are always extremely pleased with how well he is doing. Dr. Flannery did order another thyroid test and another CBC to check for childhood leukemia. Down’s children have a greater risk of having thyroid trouble, so Wade will be checked throughout life for that—once a year from now on if this test is normal. He had the childhood leukemia test done as a newborn and will have it repeated several times until he is three years old. I think the risk of this type of leukemia in Down’s children is 1%. For someone to have it after three years of age is extremely rare.

Wade also had a check-up with Dr. Vickery, the ENT last week. His ears with the tubes in look fine. Wade has very tiny ear canals (common in Down’s babies), making it extremely difficult for someone without proper equipment to check his ears. Dr. Flannery had tried to look in Wade’s ears, but couldn’t even see the whole ear drum. He wondered how Dr. Vickery was ever able to get tubes into such tiny ears. When we told Dr. Vickery what Dr. Flannery had said, Dr. Vickery laughed and said that he was “sweating bullets” until he finally got the tubes inserted. We hope that Wade’s little ear canals and Eustachian tubes will grow as he does, thus reducing his risk of ear infections and fluid. For now though, Dr. Vickery will see him again in three months. The tubes should stay in for a year.
Next week we have appointments with Dr. Jones the pediatrician (for a regular six-month check-up, shots, and the bloodwork ordered by Dr. Flannery) and Dr. Brooks the ophthalmologist (for a six-month eye exam).
Posted by nstrite at 8:38 PM

I am so glad he is doing well. I love checking to see how things are going.