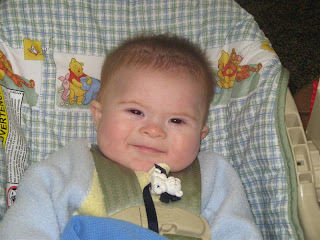 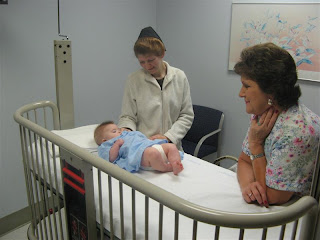 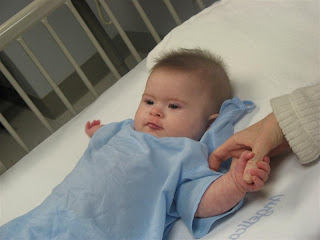 Today was a big day for Wade. We had to have him into day surgery by 6:00 a.m. for his scheduled ABR to determine how well he is hearing. Taking advantage of the sedation, the ENT also performed several other procedures. The Speech Therapist had mentioned that Wade had a restricted frenulum (tongue-tie). She felt that he was compensating well for it, but thought that since he was going to be sedated anyway, we might as well get it clipped in order to have all his speaking tools in top-notch condition. Wade probably gained another centimeter of mobility by clipping it.

The ENT also performed a laryngoscopy because of Wade’s history of squeaking during and after eating. (Since Wade has been on acid-reflux medicine though, the squeaking has almost completely stopped.) The laryngoscopy revealed a perfectly normal voice box and no noticeable erosion at this point from the acid reflux.

Wade’s ears were very full of fluid again though, so before the brain stem response test could be done, he had to have tubes put in both ears.

Then the audiologist took over with the ABR which took about 45 minutes. And we just can’t stop smiling because the test revealed that Wade has 100% normal hearing in both ears. Thank God many times over!

I know there were people praying for us today.

Wade did so well with the whole procedure. The only crying he did was for the first 25 minutes after they brought him back to his room. He was very hungry and would eat a little and then sob, eat and sob. Then he slept for an hour until we woke him up by dressing him to go home. We were home here by soon after 11:00 which was much sooner than I ever dreamed it would be. Wade has been very sleepy since then, but happy and smiling during the moments when he’s awake.

Now the only other health test he has to pass will be another vision test when he is 6 months old.

We praise God with you! Such a cute little boy!