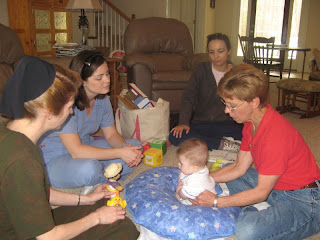 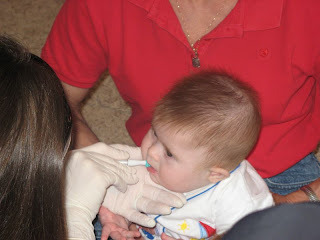 Wade getting some vibrating sensory input 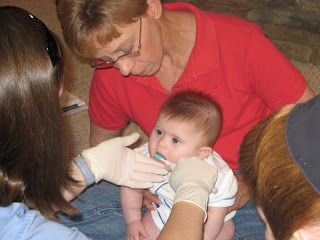 The middle of March Wade met with 3 therapists at once. That was a great day in his book. Everywhere he looked there was a face and they were all cooing over him.

The speech/language pathologist came out to evaluate Wade again now that he is eating solid food, and the physical therapist came to do an initial evaluation. The occupational therapist was here also at the same time.

They all were pleased and amazed at Wade’s abilities and progress. The physical and speech therapists showed me a few more activities I can do with him to wake up and strengthen his muscles.

Wade’s reflexes are normal for a baby his age, but he is lagging 3 months behind in his fine and gross motor skills.

His progress in eating solid foods is going very well. In fact, it has seemed very funny to me that while I was all braced for a difficult time teaching him to eat with a spoon, astonishingly enough, he has learned much faster and better than either of the other two boys did!! So I guess sometimes there are some amusing surprises that God has in store for us.
-- The Lady --
Posted by nstrite at 7:50 PM