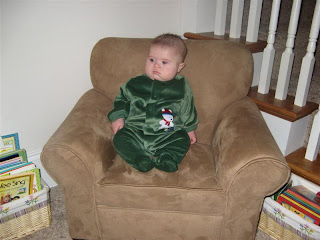 In this photo, Wade is doing a good job sitting up by himself. Back in October I posted a similar photo of Wade sitting in the same chair. However, in that photo the chair was actually lying on its back on the floor, so even though it appeared he was sitting in the chair, he was actually lying on his back. Now he can sit upright. At least long enough to snap the picture. 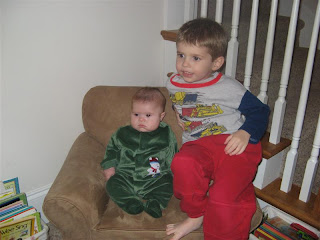 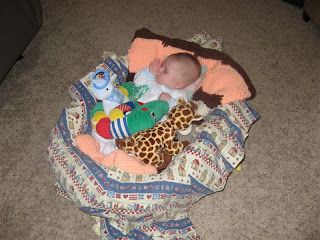 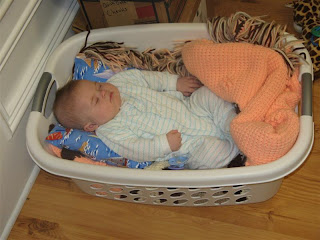 On January 4 we were pleased to be visited by the Milford & Joyce Yoder family from N. Dakota along with Joyce's parents, the Harry Brenemans. Milfords have 3 children and their youngest son also has Down Syndrome. His name is Kerwin, and he's 2 years old. We had a very enjoyable time visiting and hearing of their experiences dealing with Downs. Kerwin is doing well. He just recently learned to walk. He was a real cute guy and fun to watch how he interacted with others. I meant to get a picture of them while they were here, but I forgot.


On the 9th we took Wade back to see Dr. Flannery at the Children's Medical Center at the Medical College of Georgia. Dr. Flannery is a geneticist. He thought Wade was doing exceptionally well and wants to see him again after we have the hearing test, etc. done in Feb. Dr. Flannery said that if everything looks good then, that we won't have to see him anymore.
Posted by nstrite at 5:22 PM