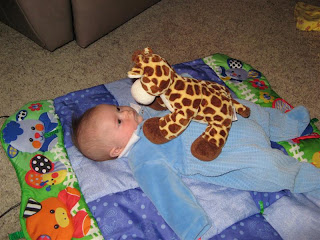 
We have been waiting to hear from Wade's ENT doctor regarding his upcoming hearing test. Dr. Vickery did call recently and told us that he had been in contact with the audiologist at University who will be performing the test, and they were in agreement that Wade would have to be sedated in order to do the test. They generally don't like to give infants anesthesia unless absolutely necessary. Dr. Vickery's advice was to wait until Wade was 5 or 6 months old to lessen the risks of the anesthesia.


The procedure is scheduled to be done soon after Valentine's Day.

Wade also has a problem with silent reflux. Along with that, he makes these funny squeaking noises during and after nursing. When he is sedated for the brainstem hearing test, they will also look down his throat to evaluate what is going on with his esophagus and voice box.

One of his therapists recommended that we have Wade's eyes checked also while he is sedated. She said two of her Down's children had to be sedated in order to have their eyes checked at 6 months of age. I am waiting to hear back from Wade's ophthamologist to see if he wants to do that or not.
Posted by nstrite at 7:54 PM

Rich & Marj Byers have a blog now!!! 4him-in-mole.blogspot.com you might want to check it out :) Isn't this a great way to keep in touch with family even though we never did before ;)

Thanks for the link, Beth! We've been enjoying it!