Schuyler and Isabel: Message without Words

"...She was broken somehow, we knew that.  But she wore her brokenness like a veil of stars."
--Robert Rummel-Hudson 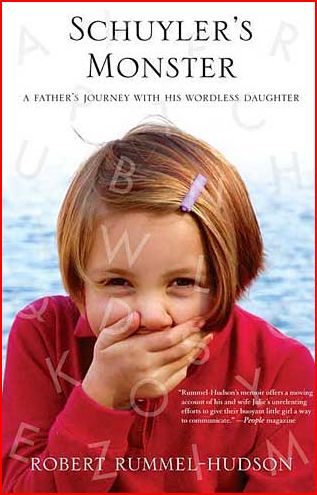 Every journey is different.  Every person is unique.  Every disability is its own story.

Within the general categories of Down syndrome, autism, or cerebral palsy, live the individuals who in spite of some similarities of symptoms are still as varied as the hues of a summer day.

I often consider, therefore, when I write of our experiences with Wade, that our travels do not define either Down syndrome or disability for all others.  We can only describe what we know, what we are learning on our own personal road of discovery.

And, yet, it is through the open doors of other parents that we are also allowed to partake of many different journeys which awaken in us the seeds of affinity and compassion for a broader scope of humanity than we could have imagined.  It is a world of unusual richness and vitality, of brokenness and heartache, of truth and paradox.

Out of this tangled world of ambiguity, Schuyler's Monster comes to us--the memoir of a dad and his beloved daughter.

"It does not do to leave a dragon out of your calculations if you live near him," Tolkein has said.

But what about the monsters you can't see?  You know they exist because you can see what they have done, but you don't know what they look like or who they are.

A known monster is still a monster, but you can at least plan your attack, assess his weak points, and rally your own strengths.

But how do you fight the Unknown?

And as we read her story, our hearts ache with the raw voice of her father who feels that they are fighting the Monster with swords made of rubber.  It is a story of sadness and joy, of anger and honesty, of doubt and of hope.


On any given day, I felt like Schuyler was visiting the rest of us here, a tiny being not of this world but trying as hard as she could to fit in.  But it was different on Halloween night, watching Schuyler with her gauzy butterfly wings and her crazy pink hair and that braying, unashamed laugh, dancing to some wild and perfect music that the rest of us weren't allowed to hear.  On a night like that, it was even easier for me to imagine Schuyler taking flight, her pink Converse hi-tops leaving the surface of this grand rough world for the last time.

I could imagine, with heartbreaking clarity and hand outstretched, watching Schuyler fluttering happily back to wherever she came from, whatever place in the universe exists where bug fairies speak in laughter and where sad, broken fathers aren't welcome.

Rummel-Hudson speaks openly of his spiritual quest, calling himself an agnostic, but sharing his bitter angst with God after the diagnosis as well as his tender longing for a life with greater purpose, with something more.

"She is the source of my joy and my sorrow, and for all my resentment at him for giving her this burden, it is nevertheless when I am with Schuyler that I feel closest to God." 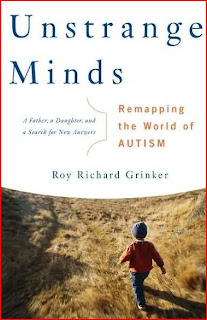 Roy Richard Grinker, another father on a different journey, came to a similar conclusion as he wrote about his daughter Isabel in his book Unstrange Minds:  "...there is something profoundly meaningful, if not spiritual, about being the father of a child with autism that has pushed me to consider lofty, abstract principles of life like truth, beauty, and goodness."

And I wonder as I read these fathers' accounts, separate and yet entwined, could it be possible that those who have no words sometimes speak with the greatest eloquence of all?