Bless Winnie the Pooh and Me Too

Wade had surgery today to have the fourth tube inserted in the right ear, which was once again full of fluid, and a temporary patch over the perforation in the left ear.  We are looking forward to the improvement of both his hearing and ours.  One day last week after we had turned his (VERY LOUD) music down to reasonable levels, I came into the living room to find him up on the bookcase with his ear pathetically pressed to the speaker.  Sad. 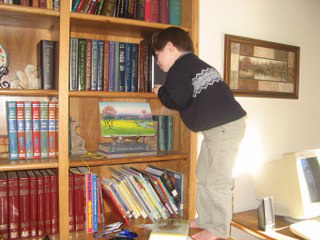 The doctor added some type of adhesive to the top side of the tube this time to encourage a longer period of function.  Other than super glue, he said, that's about all he could do.

The perforation in the left eardrum is larger than I had envisioned and has really not healed over much as we had hoped since the last surgery.  It currently encompasses about 60% of the surface space.  The patch will last around six weeks during which time we hope it will encourage new growth and healing.  The patch itself will facilitate better temporary hearing by providing more surface area for vibration.

Dr. Vickery said that Wade had better add himself and his left ear to his daily prayers for Winnie the Pooh and Mickey Mouse. 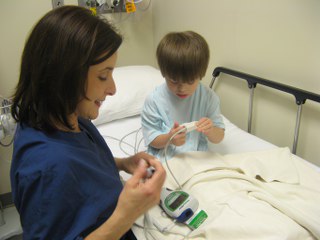 What a nice nurse with an interesting finger tickler! 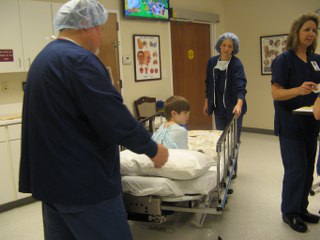 Off to surgery.  Great ride.  They treat me like a prince! 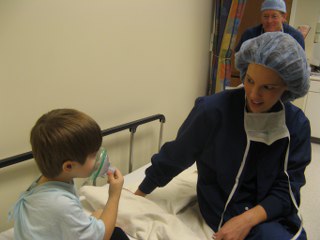 Ahhhhh!  Breathing in the essence of candy-infused sleep medicine.  (Wade loved that and happily breathed it until the mask fell out of his sleepy hand.  Then he giggled and went off to sleep.  Happy medicine at its best!) 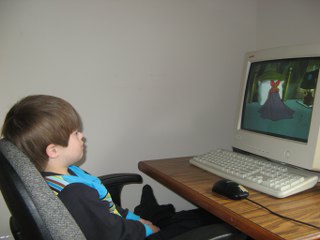