In a recent post, No Dogs = Deer, I spoke of the demise of our two dogs.

I thought about getting some puppies from the pound, but after finding out the cost would be $80 - $120 each, I gave up on that idea. I found someone with a litter of mixed Lab pups that we could buy for free. I brought two of them home. Karen doesn't think they are as cute as the others we had, but is willing to adopt them as long as they perform their job of keeping the deer chased away. 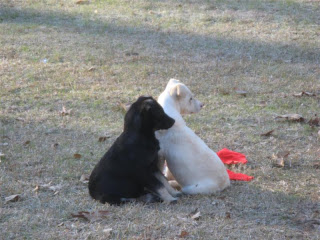 I named the black one Gus. When we were deciding on a name for Wade, I wanted to call him "Gus". That would be short for "Augustus George". You know, since we live in Augusta, Georgia. Karen didn't think that was nearly as cute as what I did. So now I have a dog named "Gus".

Sam & Gus are also the names of two characters in one of Christopher's favorite books.

nice to know that there is family out there with a sense of humor!!!!