When You Look At a Sunset, What Do You See? 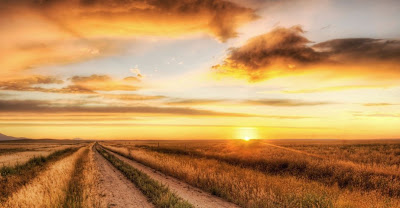 Thoughtful people in the nineties [1890s] told themselves in all seriousness that they should no longer admire a sunset.  After all, it was nothing but the refraction of white light through dust particles in layers of air of variable density.
- Jacques Barzun in Use and Abuse of Art

Just as Keats knew that cold philosophy will "clip an angel's wing" and "unweave a rainbow", so also do we now know that biology will never capture the true essence of Down syndrome.

It is for this reason that each year we go with Wade and speak to a group of 200 first-year medical students. 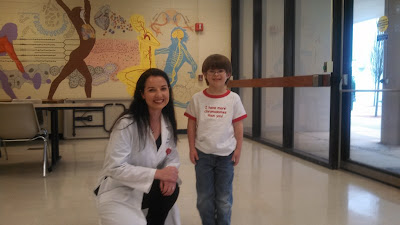 We invite them to step outside the textbook for a moment into a world of upside-down elephants and mud-puddle geography.  A world where diversity brings unity and brokenness has value.  A world where doctors share the stage with those who have 47 chromosomes. 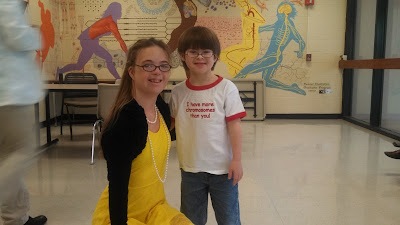 This year we were joined by an amazing young woman from Florida, who is the sister of a med student from last year's class.  She shared in her own words what it is like to be an adult with Down syndrome as she attends college and navigates (alone) a campus with some 30,000 other students.  Her story was honest, spunky, touching, and funny.  Her family came along with her, including the brother-in-law she introduced as "The Rat".  Her words were inspirational, not only to the students, but also to our family; and Wade loved having his picture taken with her.

Wade also spoke to the class this year:  "Hello, everyone.  My name is Wade Strite.  I am six years old."  He did well, introducing himself slowly and distinctly, and then later reading sentences that the students typed for him.

The interaction with the students and the thoughtfulness of their questions made a great discussion.  We hope they will go on asking questions, searching for answers, and allowing those answers to make a difference in the lives of their patients.

To what extent does a genetic deviation determine the destiny of a person?

Is one life more valuable than another?  How do we measure value?

Is it possible that those with brain anomalies are able to supply our world with needed talents the rest of us lack?

Temple Grandin seeks to explain some of these unusual strengths in her latest book The Autistic Brain: Thinking Across the Spectrum. She concludes, "If all genetic brain disorders were eliminated, people might be happier, but there would be a terrible price."

And, I would add, sometimes they also define who the rest of us are.

Sometimes in this world, we are enabled to become so compelled by passionate belief that we can swallow our fear of 200 very intelligent medical students in order to share something much bigger than ourselves.  Sometimes it takes the personal observation of an extra chromosome in order for us to appreciate the purpose and beauty of many other orientations of brain function.

Sometimes, perhaps, it takes a small voice saying, "I am six years old" in order for us to enjoy the sunset again. 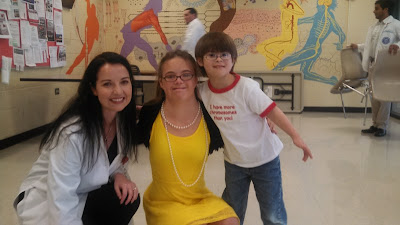