The Language of Music

"It's easy to play any musical instrument: all you have to do is touch the right key at the right time and the instrument will play itself."- J.S. Bach 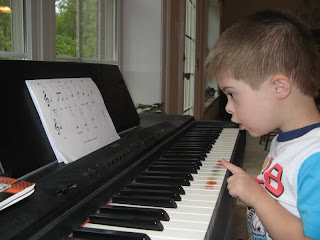 Wade began music therapy with a Kindermusik class when he was 3 years old. After that class was completed, we continued with one-on-one music therapy over the summer. We have kept on with music therapy ever since except for a break this summer. He now has music therapy twice a week with two different music therapists. 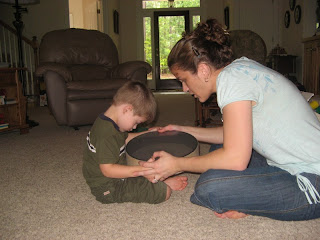 One of the first benefits of music therapy that I saw in Wade was an improvement in rhythm. Because rhythm is included in the backbone of speech, as a child's rhythm improves, so also does his vocabulary.  I had thought that it would take much hand-over-hand tutoring to accomplish the art of staying in rhythm, but Wade was soon tapping to the beat, inspired by observing and imitating (what seemed to be) playful games with the music therapist. And along with a better sense of rhythm came new words and longer sentences. 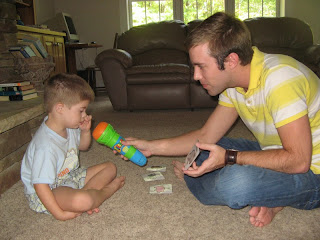 Another huge benefit of music therapy for Wade is that the music therapist is able to take any of the child's other pt, ot, or speech goals and incorporate them into the music. Because music has always been a passion for Wade, it provides the key to unlock the doors of fundamental learning by seducing his attention and holding it. Music becomes an invisible schoolhouse in a natural setting enabling him to learn and meet his goals without ever realizing that he is working. Music has helped to stretch his attention span until now he is able to put small puzzles together independently and to complete tracing pages mostly on his own. Days of the week, months of the year, weather, abc's, and numbers have all been learned through music. When he was younger, music was the best way to teach him sign language. Additionally, isolating problematic letter sounds and putting them to music also helped to make him aware of remembering to say them the correct way.

Music therapy's incorporation of movement and learning corresponds well to the explosion of current research on the connection between movement and cognition, whose findings imply that education should involve movement to enhance learning. When Wade manipulates learning mediums with his hands, or moves with purpose related to mental activity, he processes and retains new information much better. It stretches his ability to complete sequencing activities correctly and aids in the process of permanently downloading new vocabulary into his brain.

When Wade turned 4, the music therapist began to do adaptive piano along with the other mt activities. Once again, I have been amazed at the performance of cognitive skills this has showcased that I might otherwise have missed. This is a great picture of order in the environment creating order in the mind. Now, at almost 5, Wade is playing simple songs on the piano (by reading color-coded music) and is isolating the appropriate fingers to use with the coordinating keys. He is also best able to follow a sequence when it involves the keyboard, leading me to believe that music has enhanced his listening skills and helped him to focus with much greater clarity. Research again backs up this theory by showing how brains can organize themselves in response to sensory input. An interesting study was done in 1980 by M. C. Piper and M. K. Ramsay on the effect of early home environment on the mental development of infants who had Down syndrome. In this study, organization in the home was a direct factor in predicting the IQ of these children.

More recent research reported by Oliver Sacks in Musicophilia reveals the fact that a professional musician's occupation can be identified by simply seeing a picture of his brain. In other words, the study of music has given him more connections between the hemispheres of his brain than most other people have. If that is true, then it seems likely to me that a well-ordered introduction and guidance to music beginning when my child is very young will have long-lasting impact on his cognitive development throughout life.

It is a passion worth cultivating.

* For further information on music and Down syndrome read this article written by Stephanie Bennet in 2009 entitled "Music may improve verbal memory--Implications for children with Down syndrome".

* And do take a look at this clip about Bryann Burgess who will be singing the national anthem for our Buddy Walk in a couple of weeks. Bryann is currently a junior at the University of South Carolina where she is participating in their non-degree program, living on campus, and attending classes on her own without a tutor. Her passion for teaching and her talent for music come together in the work she is doing in assisting with a Kindermusik class.