How Flexible Are You? 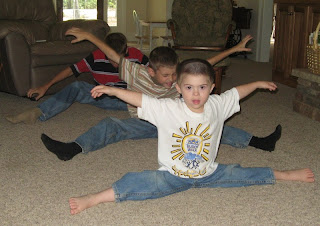 Wade's amazing ability to flex with ease has always astounded me.  He's just shy of being one of those people who can sit on their own heads.

And even while we know it is caused by the thing called hypotonia, we're still a little jealous because all we can sit on are other people's heads.

But even though we ordinary people may be limited in our physical range of motion, we still have the potential to learn how to flex in other areas of life.  Scientists have only scratched the surface in their understanding of  the plasticity of the brain and its potential to change and adapt to its circumstances.

Recently, I read a book entitled The Brain That Changes Itself  by Norman Droidge.  This book was fascinating in its stories of the amazing adaptability of the brain which, when injured, is able to allocate adjacent brain matter to take over for the damaged part.  Detailed in the book are the works of dedicated scientists and researchers who are developing programs which exercise the brain in specific ways to enhance performance in damaged areas.

Especially interesting was the story of the first doctor to perform the amputation of a phantom limb, which he did by the use of illusion!  Simply by employing a trick of the mind, the phantom limb no longer itched where it couldn't be scratched.  No drugs involved; no side effects.


The exciting thing about some of these new possibilities is the hope that exists for the restoration and maintenance of brain function not only for those with brain injuries, but also for those of us (everyone) who will lose valuable brain reflex and capacity as we age.

As we learn to flex our brains when we are young, we provide better pathways for adaptability when we are old.

So don't fight against having to learn new things, walk new roads, and map unfamiliar territory.  It's all part of developing those brainy washboard abs. 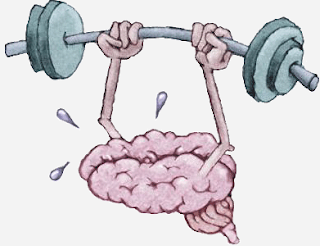 Another item of interest involved the rehabilitation of stroke victims.  Insurance companies usually only provide rehab for a certain number of weeks because after that point, the patients seem to plateau and fail to make any more progress.  But current research shows that during the weeks when the patients' achievements appear to have leveled off, the brain is, indeed, still busy working behind the scenes sorting everything out and making the new connections that are needed to support the further transformations that will take place.

It is in the pausing, that the long-term learning takes place.

I like that thought.  Wade has provided me with many opportunities the past four years to pause and think---thoughts about learning and love, about beauty and simplicity, about embracing change and welcoming flexibility.  And there is really no rocket science involved.

But now I know that simple steps can be made simpler.

And I must be more patient to teach than eager to test.

And different is interesting, not frightening.

And the world is friendlier than I thought.

And loving someone unconditionally doesn't eliminate the need to train and to guide.

And there is a network of intertwining lives, past and present, that have provided a rich world for Wade to live in with possibilities that have never been better.

And I realize that the least of these really aren't least at all.

And I know that trying to explain all this is like picking apart the wings of a butterfly--the loveliness I see in my mind only looks awkward and tattered when I try to dissect it.

Because love still can't be explained.  Not at all, not by the most brilliant brain imaging.

And God can't be explained either, but He is closer and I thank Him daily for giving me the opportunity to flex where it matters.

Because in turning my world upside down, He helped me know which way is up.

Come to think of it,  when it comes to mental gymnastics, I might actually be sitting on my own head.