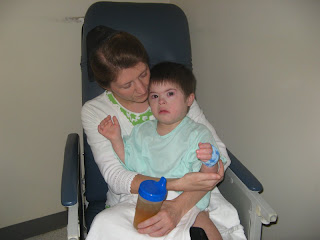 We've been fighting fluid on Wade's ears again for over a month. He was on antibiotic in October, but at his November appointment the fluid was back (or had never left).

So he had surgery today to have his adenoids taken out and the third set of tubes put in.

In spite of being on antibiotic, his right ear was still very full of fluid, which appeared to have been sitting there for some time. The tube was also out of his left ear, but a perforation remains which is larger than the hole for the tube would be. So the doctor didn't replace the tube in the left ear, but treated the hole to encourage healing. We will have to watch that ear more carefully now because of increased risk of infection.

His adenoids were very large, so it was a good thing to have them taken out as well.

And in order to make sure I worried properly before surgery, Wade managed to have an allergic reaction yesterday to the antibiotic he was taking. Big, lumpy, itchy, red hives which were still itchy, lumpy, and red this morning.

But now we're home and doing fine, thanks to God, the prayers of friends, and a terrific doctor.

And Wade is joyfully singing.

Did you know that songs with no tunes can be utterly beautiful? 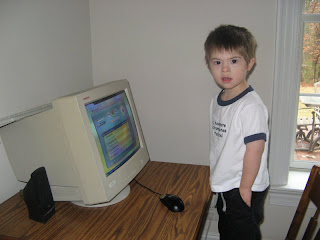 Aww! Wade looks a little unhappy on that first picture, or maybe he is hurting. I never see him that way!!! Anyway, I'm glad the operation is behind. And I glad for the good doctor too, but I'm glad Wade has such a good mommy too! I'd love to hear his tuneless songs!
-coleensr

Jonathan slept much more soundly after he had his tonsils and adenoids out. And less snoring. Get better soon!

So glad everything went well! It is so hard to see little ones suffer. Trust Mommy can breathe easier again, too. You are one of those 'one-of-a-kind' variety, Karen. So glad God gave you to Wade. Bonita