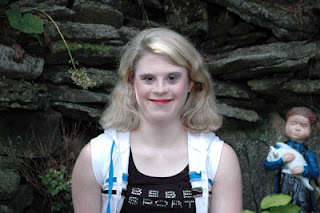 At the Conference we attended we were privileged to meet Bernadette Resha & her husband, Josh Putman. They both have Down Syndrome and were celebrating their 1st wedding anniversary..

Their story is interesting and can be found in this article that appeared in the Tennessean.


Bernadette is an accomplished painter and had some of her portfolio available for purchase at the convention.


In addition to being an artist, she is also a violinist, model, public spokesperson, and has appeared on television and in film. In 1994 she was Special Olympic's Athlete of the year both locally and for the State of Tennessee. The Easter Seal Society made Bernadette its 2000 Adult Representative and the same year she started a career as an artist.
Posted by nstrite at 7:38 PM