WADE IN TIMES SQUARE
Wade's photo will appear in lights on Broadway on Sunday, September 28 as part of the National Down Syndrome Society's video production to demonstrate that people with Down syndrome can be successfully included in community activities, education and employment.
His photo was selected from 2,500 entries in the NDSS nationwide call for photos. Approximately 200 photographs will appear in a video production to be shown on the larger-than-life plasma screen, located in the heart of Times Square. The 30x40 foot landmark full motion video screen is seen by 1.5 million people daily.
The show will air at 10:30 a.m. and will be repeated at 10:50 a.m.
The video production, coordinated by NDSS, illustrates children, teens and adults with Down syndrome working, playing and learning with friends and family.
The Times Square video production kicks off National Down Syndrome Awareness Month, which includes the 2008 Buddy Walk™. This year, Walks will be held in more than 275 cities across the country, as well as many international walks. John C. McGinley, who plays Dr. Perry Cox in the hit show "Scrubs," is the 2008 National Buddy Walk™ Spokesman. Mr. McGinley is both an accomplished actor and the proud father of Max, his ten-year-old son who has Down syndrome. The New York City Buddy Walk™ will be led by Mr. McGinley and NDSS Goodwill Ambassador Chris Burke,
star of the long-running series, "Life Goes On." For information about National Down Syndrome Awareness Month or the NDSS Buddy Walk™, visit www.NDSS.org 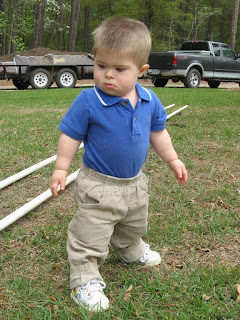 (This is not the photo that will be shown in the video)
Posted by nstrite at 4:13 PM

Congratulations to Wade! And he is adorable...
http://www.down-syndrome-facts-and-fiction.com

Congratulations to Wade, I know you are sooooo proud of him. AND, what do you think about the adorable little Trig Palin? Watch out world...here we come!!!

I think Down Syndrome in the White House would be a good idea! They need a little more love there. :)