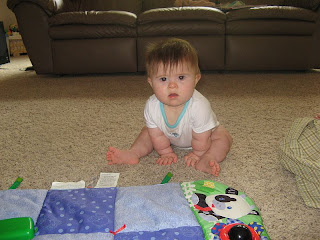 Wade is now 8 months old and is doing very well in every way. He is doing most things at a slower pace than our other boys due to his mild muscle weakness which accompanies Down Syndrome. He learned to roll from his back to his tummy at 6 ½ months and just last week rolled from tummy to back once. When he’s on his tummy he pivots himself in a circle. He can sit propped on his little arms for a few moments. I had Randall take the picture while I sat to the side ready to catch him! 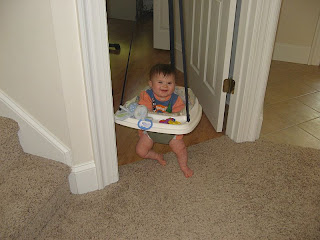 A friend loaned me her jumper swing and this has been a great aid in teaching him to use his feet and legs. He loves the swing and has learned to turn himself with his toes to find us. He still doesn’t jump with it, but loves when the boys help him bounce. 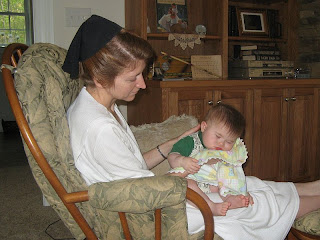 Just within the last 10 days he has finally really started grabbing toys. Before this, he would reach for them but only if he was really inspired. Still a very sociable character, he continues to think that the therapist’s face is much more interesting than any toys. Lately the OT has been bringing two students with her and he thinks that’s great. The more faces, the better! 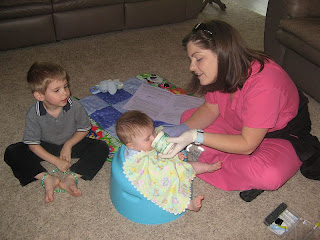 He started eating solid foods at 5 months and has done much, much better at that than either of our other boys did. Now he thinks he’s a Big Person and wants to eat table food at every meal. He learned to drink from a cup at 7 months and now at 8 months is supposed to put the cup away and drink from a straw. Liz, the SLP (Speech,Language Pathologist), brought him a honey bear with rubber tubing for the straw. She hadn’t expected him to use it until he was a year old, but he took to it instantly and drinks from it at every meal.


Now for the very weird part: at 6 months old Wade started going mess in the big toilet and has been doing it ever since. No, this is not part of the therapy. It just happened accidentally. He grunts and I set him on the pot and he goes. Then I laugh hysterically and so does he! We’re enjoying it while it lasts—certainly saves on diapers and clean-up anyway. (This has been documented by the SPL and both grandmas who have all experienced the phenomenon.)

We are beginning to teach him sign language. Since he is predisposed to have language difficulties because of the Down Syndrome, teaching sign language along with spoken language is supposed to be a way to unlock the doors of language in his mind. So far we do the signs for eat, more, all done, drink, and, of course, potty!

And as we try to unlock the doors of language for Wade, we’re trying to stop the floodgates on Christopher whose main job is to make sure his parents stay humble (or maybe humiliated). He told an unsuspecting guest on Saturday that our two puppies were “nipped and tucked”. She gasped wildly and said, “Aren’t they a little young for that?” We blushingly explained that the puppies names were Nip and Tuck. 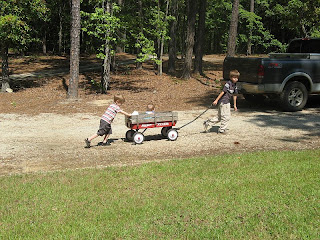 Chris & Randall giving Wade a ride with the help of Wade's Bumbo. 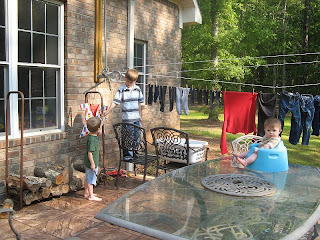 I have been enjoying your updates on Wade's progress. I am amazed at how well he is doing! Keep up the good work. He is bless with a wonderful Mom. I have a special needs daughter (almost 6 yrs old), so have been through some of the same experiences.

Our favorite sign language videos are called "Signing Time" Vol. 1-13 made by Rachel Coleman. www.signingtime.com We have been fortunate enough to have a library that carries two sets.
They have some Baby Signing time videos too. My daughter needs an enormous amount of repetition to be able to learn anything new. These videos have provided a fun way for all of us to learn sign language along with her.