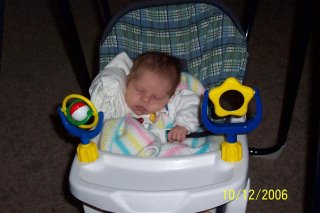 I have decided that this would be the easiest way to keep family & friends updated on the things we are discovering about our son, Wade. Of course Wade is not alone in this world, hence the name of this blog – "4 GUYS & A LADY".

Wade Michael was born Sept. 18, 2006 to two very proud parents and two excited big brothers. When Dr. Jones (pediatrician) examined Wade that first day in the hospital, he told us that Wade exhibited several physical signs that pointed to Down Syndrome. He said that he really didn’t think Wade had Down’s, but wanted to do testing to find out for sure. Exactly one week later, we received a phone call telling us that Wade did have Down Syndrome.

Now nearly one month later, we have gotten over our initial feelings of shock, disappointment, sadness, & other emotions. Wade is a wonderful little boy, and we are experiencing all of the normal joys of having a new baby in the house. We are resting in the knowledge that God has a special plan for our family, and are excited about finding out what all he has in store for us.

In later posts, I will be giving more details about some of the doctor’s visits we have had and those to come. I will also be posting some of the things we have learned and are learning about Down Syndrome. I invite your thoughts, comments, & prayers as we travel this road together. We are so thankful for family & friends who have shown us in so many ways, how much they care.

Nevin & Karen,
Our thoughts and prayers have been with you. We do not have your current address and phone number anymore. In just reading your blog... I was reminded of what those first months were like with Kerwin. Kerwin also has a hearing problem. But it has improved with a supplement that we were giving him. We are scheduled to see another audiologist, in the next several weeks. We would love to visit you all again, when we are in SC this winter. We will be there about 2 weeks probably soon after Christmas.

Nevin & Karen, My Prayers and thoughts go with you. I can only imagine, as a Grandparent of Jolene and Steve's son Logan, the pain of learning of this disability. If you don't remember, he had Reyes Syndrome and on top of that a major heart defect. This beautiful, sweet tiny boy was only 8 lbs. when he died 4 months later as a result of an unsuccessful heart operation. I know the love and joy you have for these tiny children of God. The greatest joy is the knowledge that they will always be a child of God. May God richly bless you as you take the untmost pleasure in the knowledge that God chose you as parents to love this special little boy.